The 2020 delaware hackathon: discovering the next big ideas

24 hours, 12 challenges and over 70 students divided into 15 teams: those were the numbers that greatly determined the 2020 edition of the delaware hackathon. Let’s take a look back at this unique two-day IT event held at Whale in Drongen on Thursday 20th and Friday 21st of February. Did this second edition of the hackathon top the first?

As with any hackathon, the goal for participants is to think of an innovative and creative solution to a problem. The cool thing about the delaware hackathon is that there were some real-life business cases for the students to tackle – carefully selected from the DEL20 (our ecosystem of innovation). Challenges ranged from automating tedious administrative tasks and enabling micropayments with blockchain to geotagging products and creating safety training in VR. There were plenty of assignments to suit all tastes and talents. We even had a team from delaware UK joining us!

“This isn’t my first hackathon,” said Dante from University College Ghent. “But what I really liked about this one was that they didn’t expect us to come up with a societal problem ourselves. The suggested challenges were very tangible, specific, and came straight from the day-to-day business.”

As soon as the customers had finished providing more context around the issues, the tech-savvy students set to work. They either started brainstorming in the cozy corner (bean bags are perfect for that) or peppered customers with additional questions. Also present were some 30ish delaware coaches: they helped students with the technical side of things or encouraged them to look at the challenge from another angle.

Applied IT student Arno didn’t sleep much: “I guess you could call us machine learning novices. At 2.30 in the morning we were stuck. If it wasn’t for our coach putting us back on the right track, we wouldn’t have made it in time. So, we started over. There’s definitely a steep learning curve!”

No one should start a design thinking exercise on an empty stomach. That’s why we offered fresh soup and juicy burgers as a late-night snack. And while some students said ‘sleep is for the weak’ and continued hacking through the night, others went for a well-deserved nap in their private pods. The honeycomb-shaped sleeping units were equipped with USB charging ports and an electric heater to keep our busy bees warm.

After an intense few hours of hacking and a short night’s sleep (for some), a healthy breakfast was most welcome on Friday morning. The 15 teams then continued working up until the late afternoon, when customers started trickling back in. Almost time to pitch!

This was the moment of truth. Students got up on stage and presented their solutions, applications or POCs to the audience. The online survey system allowed everyone – the jury, the customers and the other contestants – to vote for their favorite. All they had to do, was scan a QR code! And what about the prize for the winners? They could take home some cool gadgets: a Google Nest Mini, a Rocketbook Everlast (a reusable notebook) and a SanDisk Portable External SSD. 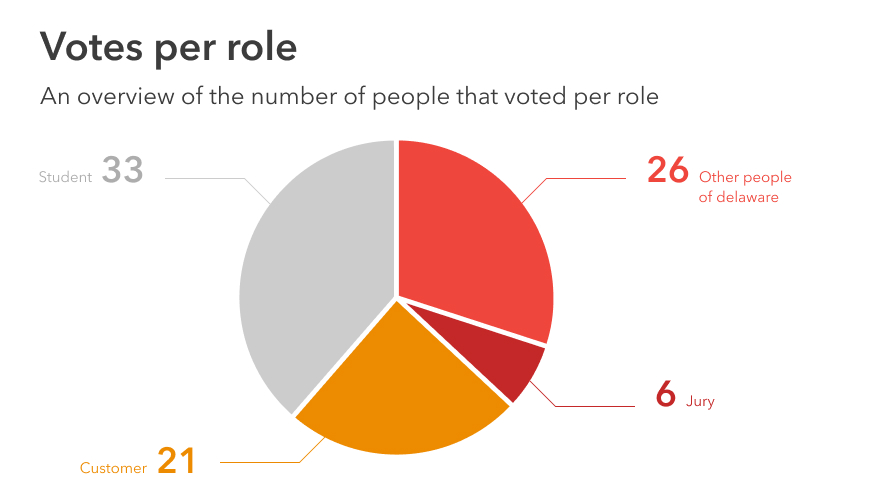 And the winners are…

Civil Engineering students Gaetan, Jonas and Edouard ended in third place. They figured out how to create deep networks for image classification in MATLAB using 360° images, in order to recognize even the tiniest of screws. This challenge was presented by Barco. Nico Van Herzeele, Enterprise Architect at Barco, was pleasantly surprised: “The team took on a very pragmatic approach. They asked loads of questions, took a step back and focused on the feasibility of the concept (a 3D visualization) rather than on the tool – which is exactly what we needed them to do. I was stunned to see their creativity and complementarity in action.”

Second place went to Emiel, Jessy and Senne from team ‘Baby Penguin Fan Club’. The audience was in awe of their VR safety training platform made for De Watergroep. And it doesn’t stop there: “The potential is huge. We’re definitely considering developing this further,” said David Baetens, Coordinator Asset Management Systems at De Watergroep. He put on the VR headset himself and tested the training simulation. “This was a visually powerful pitch. If I picked up my safety helmet and put it on my head, I’d get an extra point in the simulation. Excellent execution! They really thought of everything.”

Victory went to Casper, Robin, Nigel, Chiel and Ewout from team ‘BOOS’. They were challenged by Zorgbedrijf Antwerpen to devise a user-friendly smart speaker for the elderly. The students manually implemented 200 commands into a Google Assistant device, from ‘I need to use the bathroom‘ and ‘what’s for lunch today’ to more pressing matters such as ‘I’ve fallen down and need help’. The speaker even responds to his new name, ‘doctor Peter’. Impressive, to say the least! Waldo Van Bergen, IT project manager at Zorgbedrijf Antwerpen, believes voice assistants are the way to go: “This is amazing. The students’ enthusiasm exceeded my expectations. I knew from the get-go that this challenge was in safe hands with them. I’m confident that healthcare is now ready to fully embrace technology.”

Special thanks go to our sponsors Albert Heijn (for the healthy snacks), Soupersmooth (for the delicious home-made soup and hummus) and Coca-Cola (for the refreshing drinks). And to all participants and the entire hackathon crew: Thank you for making the second edition of the delaware hackathon just as memorable as the first, if not more!

The delaware hackathon – 24 hours of co-creation and innovation

The delaware Student Game: where techies and business students meet

Starting at delaware: our famous bootcamp for rookies