Most social media platforms have Stories now: mobile, full-screen, vertical videos and images that appear outside of your regular feed and disappear after 24 hours. It began with Snapchat, followed by Instagram, Facebook and LinkedIn. This blog covers everything you want to know about using stories for social media content marketing.

Why all the fuss about stories?

Everything you wanted to know about using stories for social media content marketing, but were afraid to ask

Stories. Most social media platforms have them. Mobile, full-screen, vertical videos and images that appear outside of your regular feed and disappear after 24 hours. It began with Snapchat, followed by Instagram, Facebook and LinkedIn.

Now, it’s Twitter’s turn. The new kid on the block is called ‘fleets’. The disappearing tweets can only be viewed by tapping on a user’s profile picture. Although seemingly similar to the usual stories format, fleets have a few differences, making the experience more focused on gaining an insight into the user's thoughts.

With the arrival of stories on business-oriented social media such as LinkedIn and Twitter, their influence in thought leadership and professional content marketing is growing by the minute.

Let’s take a look at some numbers:

So, with almost every social media platform hopping on the Stories bandwagon, what are the benefits and drawbacks of implementing a feature like this and how can your business profit from it? 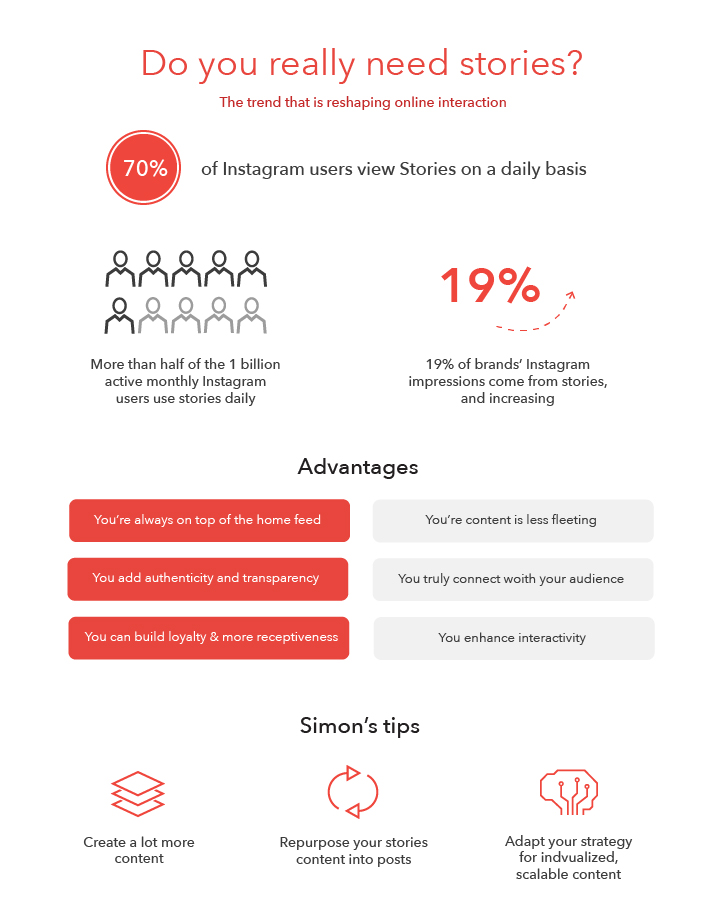 A lot of pros

Visibility: By using the stories feature across all social media platforms, you don’t have to try and ‘beat’ any tricky algorithms by posting at certain times of the day, or with an endless stream of hashtags. This feature is almost always placed at the very top of the home feed on e.g. Facebook, Instagram and Twitter, meaning it gets seen before any main feed posts and pictures.

Simply add another frame to the story to be bumped to the front!

This feature is almost always placed the very top of the home feed […], meaning it gets seen before any main feed posts and pictures.

Authenticity: stories add an additional layer of transparency and authenticity to the online brand experience–attributes that millennial and gen Z users are demanding from brands and influencers these days. It’s much more difficult to stage the perfect-looking story, and that fact encourages a casual approach that shows your audience more of who you really are.

Engagement: Stories offer a more personal and interactive connection with followers, which increases audience engagement, trust, and loyalty. Of course, you should remain professional, but people are much more likely to interact with you if they feel a more personal connection.

Stories add an additional layer of transparency and authenticity to the online brand experience” and “offer a more personal and interactive connection with followers, which increases audience engagement, trust, and loyalty.

More receptiveness: The return-on-investment of using stories is that profiles can build loyalty through content without flooding a feed. Because users must select to view a story, as opposed to being forced to see the content when scrolling the main feed, they are arguably more receptive to the messages conveyed through story clips.

Interactivity: Unlike Snapchat or Facebook, which only show how many people viewed your content, Instagram stories also reveals which users saw each story, thus highlighting a list of active followers for you to engage with. On Twitter or LinkedIn, brands can be interactive with fleets by encouraging followers to tap and hold their fleet to land on a certain outcome; asking followers to screenshot a fleet template and fleet it on their page; or hosting a contest or giveaway with a limited number of people who DM to get exclusive content or a prize.

Because users must select to view a story, […] they are arguably more receptive to the messages conveyed through story clips.

And a few drawbacks

The concept of stories has been around for years, so it seems that LinkedIn and Twitter were initially resistant to implementing disappearing content on their platforms. Part of that hesitation may come from the possibility for users to abuse the feature. Twitter in particular is well known for the small percentage of users that like to harass, troll, and otherwise turn Twitter into a very toxic place. Some Twitter users expressed concerns that this new feature could empower those who already use Twitter to harass other users.

All social media are starting to look the same

Companies are always eyeing their competitors to see what works; that’s just market research. But copycatting on social media has led to platforms that look suspiciously similar, with fewer things that set them apart. But simply replicating a competitor’s big idea doesn’t always lead to replicating its success.

“I would say we've never seen a great ‘lift and shift’,” says Nicole Greene, an analyst at Gartner. When LinkedIn and Twitter adopted the stories format, it didn’t lead to a lot more engagement on those platforms, only more eyerolls. “The better strategy would be making it even better for your platform,” says Greene, by “tailoring these experiences to your audience.”

What’s your benefit in all this, you wonder?

As you can see, brands can leverage the benefits of stories to engage followers in an entirely different way. But is it more effective than posts?

That depends on your goals. If you want to create that sense of urgency and excitement with your content, then stories may be the way to go. However, if you want a more permanent solution for driving traffic to your site or establishing a presence on social media, then traditional posts may make the most sense.

You could also explore the benefits of using a combination of social media posts and social media stories to satisfy more than one goal and to serve different audiences within the same platform.

If you want to create that sense of urgency and excitement with your content, then stories may be the way to go.

Eager to get started? Here are some of my personal tips!

To integrate stories into your social media marketing strategy, be prepared to:

Stories perform best when you’re uploading a few at once. Create a mass amount of vertical video or photo content in advance, then post them strategically over a period of time, whether you choose to create a week’s worth of content or more.

We'll share this blog as a story on our own social media and keep you informed of the results!